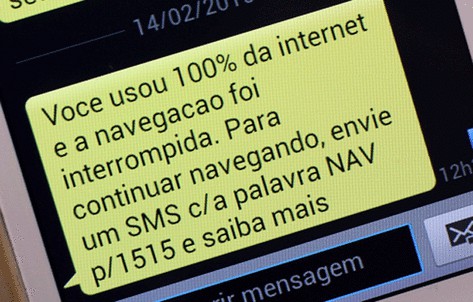 Injunction prevents carriers from blocking access to unlimited plans. STJ benefits Hi in prepaid plans
A preliminary ruling by the Ceará State Court of Justice (TJCE) prohibited mobile operators Oi, Claro, TIM and Vivo from cutting off internet access in unlimited plans, even when the franchise contracted is reached. The decision, issued last Wednesday (24), applies to consumers of Capital who have contracted unlimited mobile internet service. The decision, handed down by Judge Márcia Oliveira Fernandes in a public civil action brought by Procon Fortaleza, established a daily fine of R $ 20,000 for each of the operators in case of non-compliance.
However, the Superior Court of Justice (STJ) has ruled that all actions involving internet franchise of Oi’s prepaid lines are suspended in the country – until a single court is defined to render a decision in all cases. Until Ceará Justice is officially announced, the injunction also applies to these clients.
According to the director general of Procon Fortaleza, Claudia Santos, the public civil action was motivated by the operators’ non-compliance with the Consumer Protection Code (CDC). “In advertising, companies offer unlimited plans, but when the user exceeds the franchise limit the internet service is now blocked, which means unilateral modification of the contract,” she says. “Clearly there is non-compliance with the CDC.”

She also states that she will appeal Oi as soon as she has officially announced. “What happens in Oi’s case is that several courts have filed for injunctions. The operator then pointed to a conflict of competence between the judgments. And the STJ has decided that only one will make a decision in every case. ”
Until last year, when the contracted limit was exceeded, operators slowed the Internet – a measure that was banned by the National Telecommunications Agency (Anatel). Since then, after reaching the limit, access is cut off and is reestablished only by contracting an additional package.
Attorney Fernando Férrer, an expert in Consumer Law, advises consumers who feel harmed by blocking the Internet signal to file a lawsuit with compensation claim. For this, he says, it is necessary to provide evidence that the lock has caused harm, such as some activity that the user has failed to perform due to lack of access. “You have to prove that the damage existed. Modification of the contract unilaterally is inadmissible. ”
Férrer considers that the jurisprudence established in the country on indemnities is still below ideal. “Unfortunately, in Brazil, the indemnities in the convictions for poor service are still derisory, given the economic power of the companies,” he says. “The condemnation serves to repair the damage, but above all it is pedagogical, so that not happen to other consumers. ” In addition, the lawyer says that often the client’s injury is so small that, in view of the possible compensation, he feels discouraged.