Landline or pay phone. If for many people these devices have become obsolete because of cell phones, just over 30 kilometers from Florianópolis they are the only options for residents to keep in touch with someone. The poor quality of mobile phone service in the state was the target of a CPI (Parliamentary Commission of Inquiry) at Alesc (Legislative Assembly of Santa Catarina) in 2013, but the problem remains. On the one hand, operators argue about the bureaucracy in obtaining environmental licenses for the construction of new antennas, and on the other, authorities complain about the lack of regulation by Anatel (National Telecommunications Agency).

“The cell phone is only for play,” said Daiana Souza, 33, a saleswoman in the Colonia Santana neighborhood of São José. “No operator picks up here in the region. In SC-407 there is a signal from Hi and Claro, but not so good. Here it is common for people to use the pay phone, ”he said. 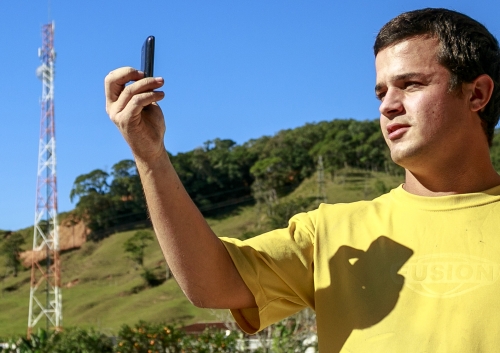 A resident of Antonio Carlos, the bricklayer Romário Pitz, 19, had to buy a chip from another cell phone company so as not to be incommunicado during the service in São Pedro de Alcântara. “The colleagues at work told me that here only got Hi, but I used TIM, so I had to stay with both,” he criticized. The poor quality of the telephone and mobile internet service was the subject of lawsuits by the MPF (Federal Public Prosecution Service) and MP-SC (Public Prosecution Service of Santa Catarina), which set up a group to investigate the complaints. “If a citizen buys a service, he has to receive it completely, not partially. Operators cannot simply say that ‘service can fail’, ”said state prosecutor Carlos Augusto de Amorim Dutra of MPF-SC.

Problem justified by lack of licenses

After six months of hearing from representatives of public agencies and entities linked to the telecommunications sector, Alesc’s Telefonia CPI ended an agreement with the four main mobile operators: TIM, Oi, Claro and Vivo. According to CPI President, Federal Deputy Silvio Dreveck (PP), Anatel, the sector’s regulatory agency, did little to cooperate with the investigations. “Anatel didn’t even want to send a representative to the CPI. It is clear to everyone that there is no regulation, so the legislation cannot be enforced. Without their help we cannot evaluate the operators, ”he said.

In a statement to CPI, representatives of the operators justified the precariousness of the signal in the delay of environmental licenses for the construction of new antennas. For Dreveck, an agreement between the operators would solve the problem. “There is no need for companies to have an antenna in each municipality, they can share. That would be less harmful to the environment. The last information I had is that Fatma (State Environmental Foundation) has issued a license to build more than 120 antennas this year, ”he said.

Telephone operators operating in Greater Florianópolis positioned themselves through the press offices. TIM informed that the “company would not comment on the matter and meets the requirements of Anatel”.

Vivo explained that it has 535 transmission points and 48 new ones should be installed this year. Claro’s advisory said that the operator serves 199 municipalities, but did not disclose the number of antennas in the state. Hi did not send a reply. During the CPI, a representative of Anatel reported that the agency imposed more than $ 240 million in fines to mobile operators in Brazil. However, the agency declined to talk about the topic with the ND.

Earphones will have to be recovered

Among the debates on mobile telephony, a public civil action filed by the MPF-SC received a positive response from the Federal Court about the obligation of Oi SA, which has the concession of the public telephone service in Santa Catarina, to restore the TUPs. Public), the public earphones of the State in the next 60 days. The decision, published on the 3rd, is the substitute federal judge of TRF-4 (Federal Regional Court of the 4th Region), Diogenes Tarcísio Marcelino Teixeira, who set a daily fine of R $ 1,000 in case of breach of the order.

The action was motivated by complaints from users from Florianópolis, Itajaí and Camboriú in 2012. The prosecutor Carlos Augusto de Amorim Dutra was the author of the play. “The telephone company cannot simply abandon the pay phone, because it is essential for the population. If you are in a place where there is no signal or if you lose your phone, it is the only way to contact someone or to call for help in an emergency, ”he said. According to Anatel data, Santa Catarina has 29,635 ears. The report did not receive answers from operator Oi about the conviction.