With the end of slow browsing, customers of Oi and Vivo will have to buy single package to continue accessing the web.

Customers with prepaid plans using mobile internet should be aware of changes in their carriers. Oi and Vivo announced that they will no longer offer the possibility of reduced speed internet to their customers. The measure is a trend among operators and should grow in the coming years. But, after all, what changes for the customer?

From now on, consumers who have exhausted their plan’s internet capacity will have to opt for an additional daily or weekly data package to continue browsing. Failure to do so will interrupt network access until the plan is renewed. Oi will implement the measure from December 1st and Vivo has been adopting the strategy since November 6th for Minas Gerais and Rio Grande do Sul customers, and should expand to the rest of Brazil by the end of the year ( check out what the plans will look like in the next infographic). TIM and Claro also do not rule out the possibility of joining the end of the reduced speed.

The end of the reduced option, which has already been sold by operators as “unlimited” internet, is already common in the United States and Europe, and may in the future also extend to postpaid plans. According to companies, the slow speed model can create a “negative perception” about the services provided and its end is a “natural movement”.

For Samuel Rodrigues, senior telecommunications analyst at consultancy IDC Brazil, the changes will require the customer to understand their mobile internet user profile and choose a package that is more economical. “Before, the customer used the internet and if the franchise was exhausted, he paid nothing more for the reduced speed. Now, if you exceed your plan, it will feel in your pocket and will have to scale consumption, ”he explains. According to him, the normal speed of the internet can bring a better user experience, since the navigability is impaired with the reduced speed.

Superintendent director of the Avanzi Telecommunications Institute, Dane Avanzi, criticizes the end of reduced internet because there would be no choice for the customer. “Either you pay more or you get no service. The operator forces you to migrate to more expensive plans, ”he says. According to him, telephone services also leave much to be desired.

The Consumer Protection Institute (Idec) lawyer Veridiana Alimonti explains that Anatel’s approval of the modification of user charges may conflict with the Consumer Protection Code itself. “The code treats as unfair any contractual clause authorizing the supplier to unilaterally modify the content of the contract after its conclusion. Anatel’s regulation must be compatible with the law, ”he says.

The topic has been under consideration by Anatel since October 21st. According to the agency, the goal is “to ensure that consumers have their rights assured and are informed in advance, broad and transparent, about changes.” The agency, however, would have already signaled that it will not prevent any change. The condition is that any changes are communicated 30 days in advance.

Samuel Rodrigues, from IDC Brazil, says the end of slow speed is also a challenge for companies. “The operator will have to make investments to account for the increase in user traffic at a higher speed. It is no use for the customer to overpay if the service is poor, ”he says.

The Protest Consumer Association states that the change “unbalances consumer relations”. “The slow speed is in the contract indefinitely and the rules were changed in the middle of the game. It is an abusive market practice ”, says the entity’s coordinator, Maria Inês Dolci. Protest guides consumers who feel harmed to discuss the case in court. 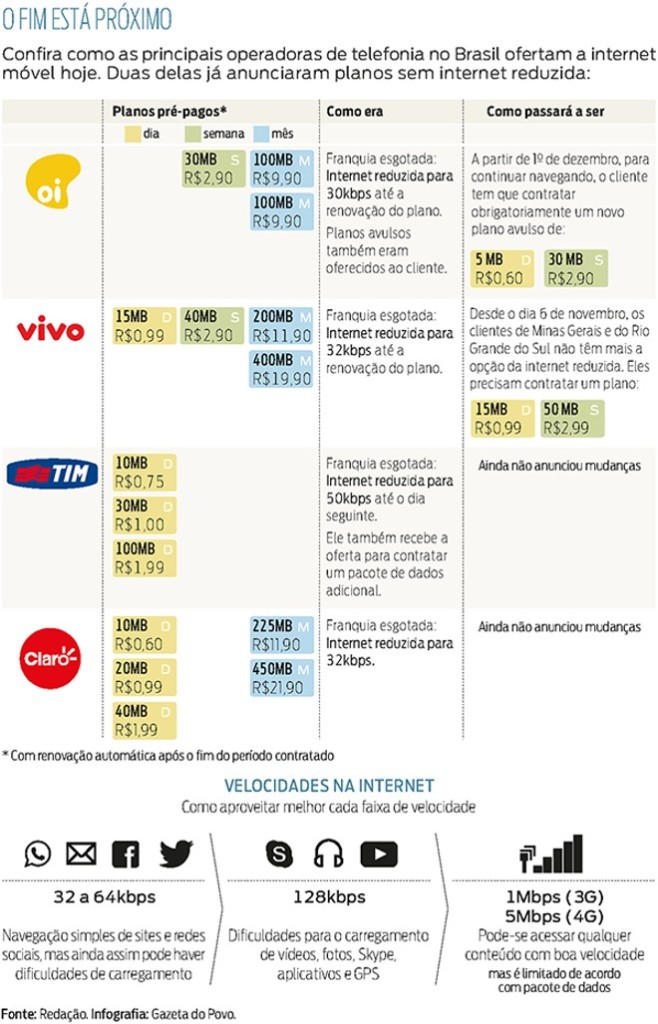 The normal internet speed is what allows the customer to surf the internet, access websites, applications, view and download photos, music and videos. All of these tools consume data that is discounted from the complete package contracted by the customer. The larger the package, the more tools the user can access faster.

In the case of reduced speed, navigability drops a lot and access to various sites is impaired. On a 128 kbps network, an application may take up to five to six times longer to load, and a video may take up to hours to download, for example. “Delay in loading a video or accessing GPS, for example, brings a very poor user experience,” explains Samuel Rodrigues, senior telecommunications analyst at IDC Brazil.

However, when the speed is reduced to 64 kbps or 32 kbps, the experience gets worse. “Even the use of search engines, access to simple news pages, social networks and emails are hampered,” explains Idec lawyer Veridiana Alimonti. It is recommended that the customer use the wifi and leave to use the mobile networks (3G or 4G), which consume more data, only when necessary.

The speed of the internet can also be affected by the environment where the consumer is. “Locations with a large concentration of people also slow down,” explains Dane Avanzi, the director of the Avanzi Institute.